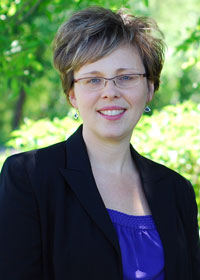 When Theresa Klein was in high school, her grandfather began showing signs of Alzheimer’s and moved in with her family. There was little understanding of Alzheimer’s then, and “it felt very isolating,” says Theresa. She later became an occupational therapist and helped create a new model for memory care at Augustana Care’s Emerald Crest. Theresa shares her philosophy here.

Is the number of people with dementia and Alzheimer’s disease increasing?

The Alzheimer’s Association projects that by 2025, the number of people age 65 and older with Alzheimer’s is estimated to reach 7 million—a 40-percent increase from those currently affected. We are also seeing people with Alzheimer’s at younger ages.

What did you want to change when you began working in this field?

I wanted to help people with cognitive issues function at the highest level possible, focusing on abilities instead of deficits.

What did you do to achieve this goal?

We created a program that identifies where the gaps are and trains caregivers to partner with residents, so they can maximize their abilities.

Have your goals changed?

While retaining our focus on abilities, we are also tailoring care to each individual’s personality and needs, as needs differ at every stage of a disease.

Do you also focus on giving people more choices?

People with dementia lose their sense of rhythm and routine, which makes it harder to choose things. We focus on restoring structure to the day so people are better able to make choices.

What is different than we’ve seen in previous years?

Each Emerald Crest campus consists of separate homes serving 12 to 15 residents. Instead of different levels of dementia in each home, we now have an even more comprehensive assessment to identify individuals’ abilities and needs. This approach allows us to bring residents with similar needs together in one home.

What do you want people to experience at Augustana Care’s Emerald Crest?

I want their experience here to be seen as a journey that fosters fullness of life, with a natural progression of care according to each person’s changing needs.

I can’t say enough about the staff that took care of my father. They were all so loving and really did care for him.

With a deep knowledge of memory care, we offer specialized assisted living for seniors with Alzheimer’s and dementia-related conditions in the Minneapolis – St. Paul area: Shakopee, Burnsville, Minnetonka, Victoria. For tours and general information, Contact Us.